Situated in the East Midlands of England, Nottingham offers the perfect blend of history, cultural diversity and modernity.

Home to the legendary tales of Robin Hood and his arch rivals, Nottingham demonstrates its unique history through the cities various cultural entities, including galleries, museums and theatres. Additionally, the city is well renowned for its close association with the arts, music and film industries.

Labelled as one of the ‘’Top Cities to Visit in 2010’’, this charming contemporary city continues to attract hundreds of thousands of visitors, and for good reason.

Aside from notable attractions involving the folklore of Robin Hood, Nottingham City boasts of many accolades, including; being named the City of Literature in 2015; Awarded the title ‘’Home of English Sport’’ in 2015, and having an award-winning public transport system.

If you’re still looking for some luxury accommodation, you need to check out The Vantage! This stunning, luxurious accommodation is perfectly located close to The University of Nottingham and Nottingham Trent University. Sit back, relax, and enjoy finer student living in this amazing setting with fabulous social spaces and beautiful interiors.

With this mind, here is our extended guide on what the city of Nottingham has to offer:

The Legend of Robin Hood

Most of us are familiar with the tale of Robin Hood. How he was perceived as a heroic figure, skilled in archery and who was notorious for ‘’robbing from the rich and giving to the poor’’.

A conspicuous figure in English folklore, the story of Robin Hood is strongly harnessed in the culture and history of Nottingham and it is all sitting on your doorstep! 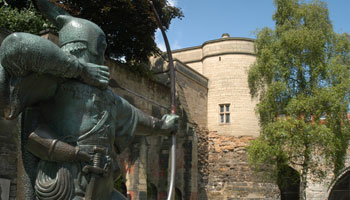 One place to start exploring is in Nottingham City, which offers a Robin Hood Town Tour. The tour allows visitors to discover the hidden features about how the story of the popular folklore icon evolved and developed.

Visitors also have the luxury of venturing into Sherwood Forest National Nature Reserve, where you will be greeted by the pleasant woodlands of Nottingham.

This forest trip provides Robin Hood fans with an exciting chance to discover Robin’s hideout known as the Major Oak. Whilst there, visitors are treated with opportunities to test their hand at some unique activities offered by Sherwood Pines. Here, you can choose to learn some archery skills or simply cycle through the woodlands.

If museums are a more favoured choice for you then you are in luck. Nottingham Castle is an ancient site with the narrative of Robin Hood placed at the heart of the castle’s history. Adding further to Nottingham’s rich history, the castle is associated with the English Civil War.

Nottingham Castle Museum continues its versatile experience with fantastic galleries and award-winning cave tours providing visitors with an exciting adventure underneath the castle.

To top off your visit, visitors have the opportunity to have their picture taken next to the Robin Hood statue located outside of the castle. This is a popular feature of Nottingham Castle that sees an assembly of people queuing up to get a picture with this folklore icon.

As part of this Royal Centre, The Nottingham Playhouse is a prominent ‘’world-class theatre’’, offering stimulating and thought-provoking shows in the form of drama, dance, comedy and music.

Notably, smaller theatres in Nottingham exist too. Venues, such as Nottingham Arts Theatre, The Lace Market Theatre and New Theatre, all offer the audience high-quality events for all to enjoy.

An acclaimed major sports centre in the east midlands, Nottingham has plenty of athletic and recreational avenues to cater for the sporting enthusiasts.

Distinctly, Nottingham, the “2015 City of Football” is home to two professional Football Clubs in the form of Nottingham Forest and Notts County. 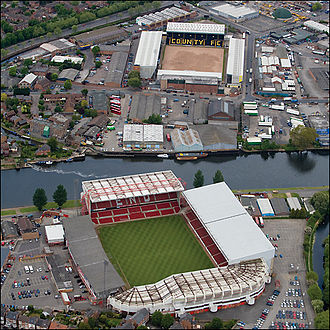 A worthy piece of information to note is the location of both of these football clubs. Uniquely, the two respective grounds face opposite each other on the opposite side of the River Trent making them the closest positioned football clubs in English Football.

Both clubs are decorated with various honours and achievements. For instance, Nottingham Forest is a Championship club side (2nd tier) with a trophy history ranging from domestic to European glory.

In contrast, with an FA Cup and English League title to their name, Notts County (4th tier) is the oldest team in professional league football in the world!

From one traditional sport to another, the county of Nottingham prides itself in being strongly associated with the world of cricket.

Reputably, the cricket club won the 2005 County Championship whilst being runners-up in the 2006 Twenty20 cup. A recipient of architectural awards, Trent Bridge cricket ground is a prominent venue for international competitions and events, including Test matches, Twenty20 cup finals and One Day International games.

Nottingham embodies some Olympic heritage through figure skaters Jayne Torvill and Christopher Dean, who won gold for their figure skating efforts at the 1984 Winter Olympics.

Within the NIC, you will find the ice rink facilitates are used for training and competition purposes, as well as housing general skating leisure and entertainment.

There is no short of entertainment in this city, as it offers all music and film lovers a wide variety for everyone to indulge in.

The musical tastes range from rock, pop, hip-hop to classical music. Notable places to visit include Rock City and the Bodega, which are venues for live music and gigs.

For the film advocates, take your pick in visiting Cineworld, Showcase Cinema de Lux or Broadway Cinema to satisfy your movie appetites.

What's New To Netflix UK? Your Full Guide For Autumn 2022

Best Bars You Should Go To As A Student In Nottingham

7 Unmissable Events in Nottingham in 2022