Day Of The Dead, Mexico: 14 Things You Might Not Know

Día de los Muertos – Day of the Dead in Mexico.

For those of us in the UK and other parts of the world, we celebrate Halloween and other spooky festivals, whereas Halloween, for instance, is just one day of the year (it’s a special, scary day though!)

Day of the Dead is a party atmosphere and family celebration over the first couple of days in November every year.

It is a pure celebration of life and death, with customs dating back centuries and families come together to celebrate loved ones who have passed away.

For us, if you want a fun, emotional representation of what the Day of the Dead is all about, watch the Disney computer-animated film Coco, about a little boy who defies his family’s ban on music and stumbles into the land of the dead.

We’re not saying it’s a documentary, but it is a cherished favourite of the PSL team and has got us interested in the whole concept of the Day of the Dead and Mexico in general.

There are a few amazing traditions that are associated with the Day of the Dead. We’ve looked at a few for you to learn more about the day and to maybe get some inspiration for your own upcoming spooky season.

1. The Origins Of Day of the Dead in Mexico and Central America 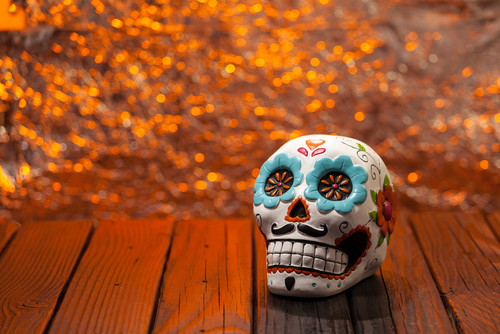 Mesoamerica, where modern-day Mexico and northern Central America is found, was home to a range of indigenous groups such as the Toltec, the Maya, and the Aztec.

There would be specific times where loved ones who had passed away would be commemorated, and it became part of the way of life.

Certain months were dedicated to those who had passed, dependent on whether they were a child or an adult.

Once the Spanish arrived on those lands, the commemoration of the dead and the rituals around it were kept and combined with Spanish traditions.

In Mexico and Central America, it is still widely celebrated and an important part of culture, whilst it has gained significance and popularity in the United States too, where there are big Latino communities.

2. Día de los Muertos is A Celebration Of Life 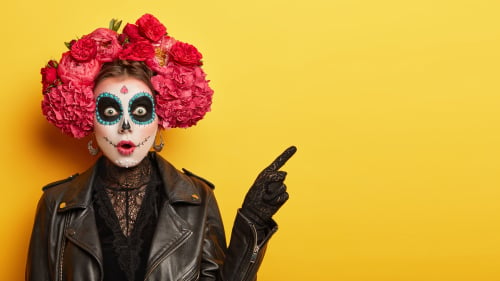 The skull isn’t meant as a symbol to scare the pants off you, and the butterflies, altars and graveside decorations and offerings symbolise the cycle of life.

That’s why you see bright colours and vibrant altars adorned with skulls and other offerings. It now makes sense why Day of the Dead is a huuuge celebration of life in Mexico, not death.

It is a time to reflect and speak to the dead, but with love and happy memories. There is a carnival, party atmosphere for big parts of the celebration.

Ancient Mesoamericans held the belief that death was just the next step on the journey of life. It wasn’t that death saw the end of life, but more that new life would bloom from death.

Day of the Dead in Mexico and Central America becomes a celebration of the cyclical nature of life, in a similar way to how agriculture works. Where crops grow from the same ground that previous crops have been buried, so too will new life come after death.

So overall, the Day of the Dead festivities happen over the first couple of days in November each year and provide the perfect chance for families to remember loved ones no longer with us, to celebrate life and death and cherish those close to us. 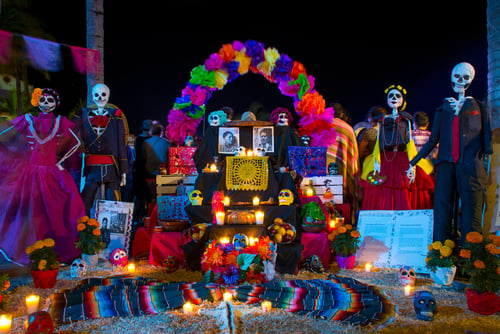 One of the staple decorative aspects of Day of the Dead in Mexico are the altars that families construct at home and around graves.

It is the main part of the festivities for most people, decorating altars with bright colours of orange and purple, and piling the altar high with candles, personal possessions, flowers, and other offerings (ofrendas).

Although historically, the construction of altars has been a private family affair, you do see many altars constructed at the side of graves and at public buildings in modern-day Mexico.

It is a spectacular way to honour your deceased loved ones, and a family will plan the next altar design for months in advance.

4. Creating Offerings To The Dead 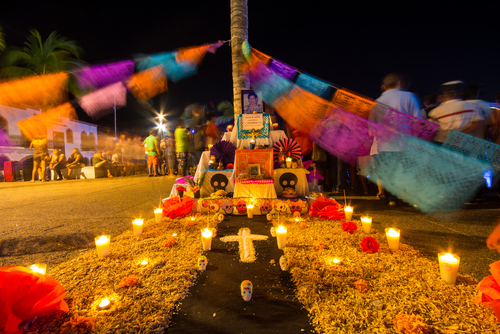 When constructing the altars, one of the biggest things that a family will come together and do is put together the ofrendas (the offerings) for the dead.

The idea is that each offering is designed to encourage the dead to come home. If your deceased loved ones return home due to the offerings, they can hear the love and prayer that the family members left behind have for them.

The offerings are split over the two days of the festivities. On November 1st, deceased children are offered sweets and toys around the altar, whilst on November 2nd, football shirts, alcohol and cigarettes are offered to adult family members who have passed. Generic offerings such as pan de muerto (sweet bread) and cempasúchiles (marigolds) are also popular.

The temporary altars and the symbol of ofrenda is a way to honour loved ones and to provide them with everything that they continue to need on their journey in death.

Pictures are placed alongside items once cherished by those deceased, as reminders of their lives.

Every offering includes the four elements…water is left to quench the thirst of the spirits, traditional paper banners called papel picado represent wind, bread and other foods represent the earth, and candles are lit to represent fire, left in the form of the cross to help the spirits find their way. 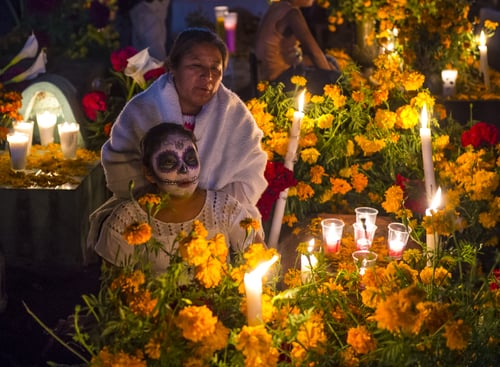 Cempasúchiles, or flor de muerto, are flowers that are often used as part of the offerings to the dead.

Mexicans believe that the flower has the power to help guide your deceased loved one’s soul back to the living world.

It has become an integral part of the Day of the Dead celebrations in Mexico because it flowers during the rainy season, just before the annual festival.

This is probably the biggest symbol of the Mexican Day of the Dead celebrations and something that people the world over recognise as a central part of the day, and of the country of Mexico.

Sugar skulls can be made or bought by the families, adding to the offerings around the altar.

Quite often, the name of a loved one is written on the forehead of the skull in icing.

You will also see biscuit and chocolate versions of the skulls during this time of year.

7. The Importance Of Butterflies 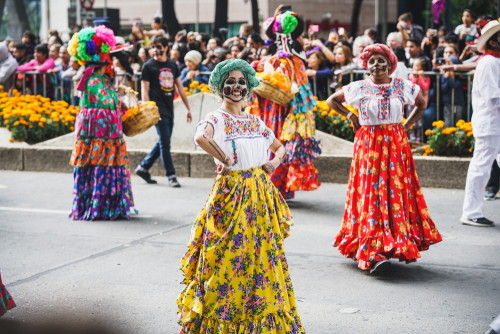 Playing quite a big role in Day of the Dead in Mexico, Monarch butterflies are believed to hold the spirits of the departed. This is because the first monarchs arrive every winter on November 1st every year in Mexico, the same day as the festival begins. 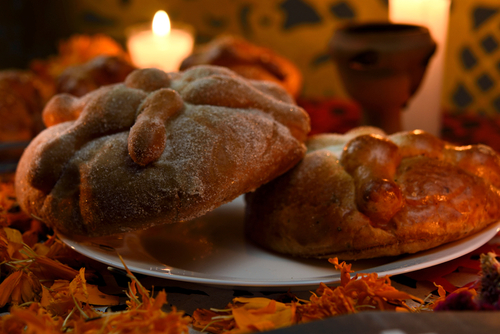 The name might frighten you a little, but don’t worry, the Mexican people don’t spend the days around Day of the Dead eating bread made of dead people.

Instead, pan de muerto is a sweet and light, orange-flavoured bread that is decorated with what looks like bone-like decorations and given a pretty good coating of sugar for good measure! Delicious! 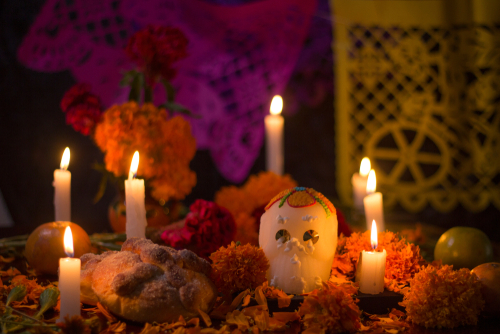 Most families in Mexico will stay at home together and celebrate the life of their family members who have passed.

It is still common though to see graveside vigils on the night of November 1st running into the early hours of the morning of November 2nd.

For Mexican communities it is one of, if not the, most iconic rituals of the entire Day of the Dead festival.

One part of Mexico where you can see graveside vigils in an extravagant ritualistic manner, is in Pátzcuaro, Michoacán, where residents and tourists take boats to Isla de Janitzio to honour the dead in the cemeteries on the island. The boats are known as mariposas, or butterflies. 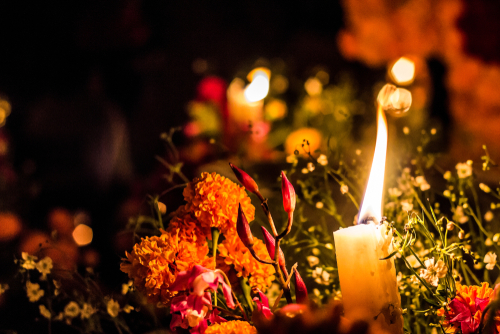 Even if a family doesn’t choose to have a graveside vigil and instead stay at home over the two days, they will still show respect to the deceased by cleaning the grave and going through the rituals associated with that.

The family will tidy around the headstone, and make sure everything is clean and clear before building the altars and leaving offerings during the Day of the Dead dates.

Graveyards are not meant to represent sombre places during these times though. They often have a festive, party atmosphere as large groups gather to clean headstones and prepare the graves together. 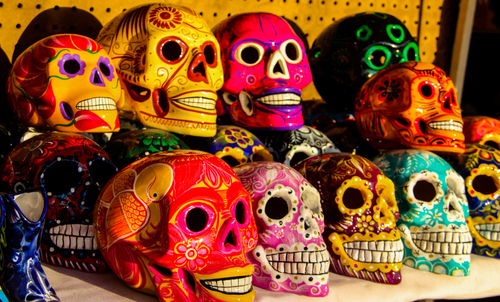 Calacas are the decorated, colourful clothed skeleton figures that you’ll probably have in the back of your mind as something you naturally associate with Mexico.

They are seen in many places throughout the year, along with sugar skulls, but have prominence at this time of the year.

You’ll find them in huge numbers across Mexico, dressed in traditional Mexican dress, sometimes in regal costumes and always a central part of the celebrations. 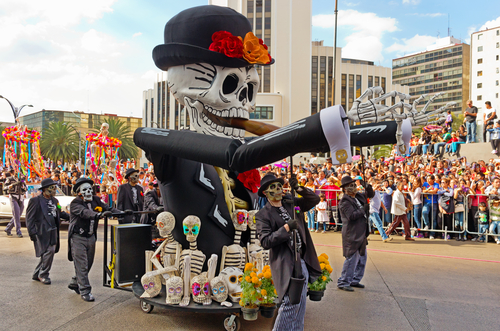 This is the biggest Day of the Dead parade of its kind, in Mexico City each year. Hundreds of people dress up as Catrina (Lady of the Dead), in full skeletal makeup and serious face, with colourful accents painted around the cheeks and the eyes, and traditional dress to fit the mood.

The Mexico City parade is spectacular, seeing so many painted skeleton faces in one place, it’s certain to startle you at first but there is nothing else like it on the planet!

13. Celebrate Life Through Dance And Music 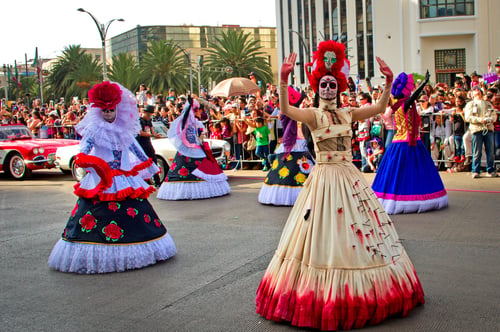 The Day of the Dead in Mexico isn’t all about the graveside vigils, the memories of dead relatives and decorative offerings, it is also filled with joy, music, and dancing to celebrate life.

La Danza de los Viejitos (the dance of the little old men) is just one of the popular dances that you’ll see around the celebrations, where young men and boys dress up as old men and walk around crouched over, before jumping up into an animated dance. It is a sight to behold for sure!

Another popular dance is one where farm workers hunt a jaguar, it is called La Danza de los Tecuanes and is exciting, getting the heart racing as you imagine what it would be like to be out on the hunt in ancient times. 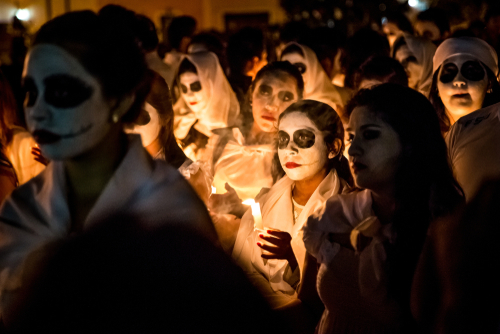 As the Day of the Dead in Mexico is all about celebrating life and those we have lost, we’ll end with the traditional custom of sharing stories of the dead.

This is where amusing stories, anecdotes, and memories of the deceased are shared.

The funnier the tale, the better, as in Mexico, it is believed the dead do not want to be remembered in a sombre way, but in a light-hearted, cheerful, and entertaining way.

It is a representation of the oral traditions of Mexican culture and history.

Well, that’s it for our roundup on everything you need to know about Mexico’s Day Of The Dead! In the UK, we mostly celebrate this time of year through Halloween! If you are planning a student Halloween party this October there are loads of options for you to follow. Halloween is an amazing time of year, and it is always interesting to see what different festivities there are around the world that follow similar forms.

Day of the Dead in Mexico is certainly one of the most recognisable, with sugar skulls, altars and offerings and a carnival atmosphere celebrating life and our close loved ones who are no longer with us. If you want to incorporate some aspects of the festivities into your own Halloween party this year, you could try cooking up some of your own sugar skulls, putting together some Mexican food offerings of your own and play some Latin music to get things moving.